Keep up to date with the latest government information 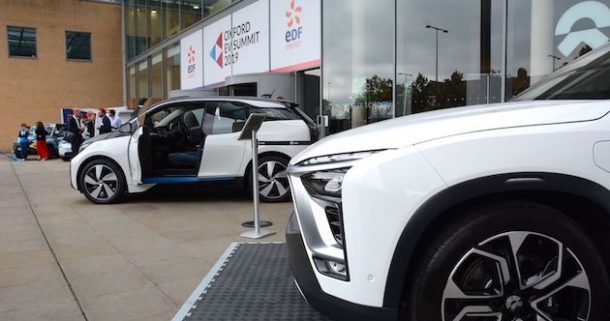 The Oxford EV Summit 2019 featured lots of smart thinking and it showed that there’s currently a huge amount of investment in electric vehicles and clean energy globally, but is the UK keeping up?…

In the style of the event itself, which only allowed very short presentations from the speakers, with no slides, and no questions from the audience, here’s a brief summary of some of the key messages from the event.

There are proposals for Clean Air Zones all around the UK, but Oxford is going further, with a Zero Emission Zone (ZEZ). Councillor Tom Hayes explained that the driving force behind this plan for Oxford City Council was local air quality, but since last year’s Oxford EV Summit event, awareness of climate change has risen back up the agenda – with Greta Thunberg being a key reason for this.

Oxford City Council and Oxfordshire County Council have now published updated proposals for the ZEZ in Oxford city centre, following 15 months of listening to businesses, residents, transport operators and health experts in Oxfordshire. From 2020, the ZEZ will see restrictions on some vehicles and journey types, which will increase gradually to all vehicles in the following years.

THE OPPORTUNITY FOR THE UK IS NOW – IF WE DON’T DO IT, WE’LL MISS IT

One of the presentations that resonated most closely with the views of Green Car Guide was that of Edward Ataii, Associate Director, KPMG Mobility 2030, who said that the UK has a great opportunity to define its role in the mobility system; this is immediate, if we don’t do now, we’ll miss it. Many countries are already ahead of us; this is a missed opportunity for UK manufacturing to come together. A system-wide clean, green, high tech solution to meet CO2 targets is needed; if it’s left to the market, it won’t work – with public EV charging being cited as an example. The UK now has to reach net zero by 2050 – this is a huge task – much more needs to be done.

EMISSIONS FROM TRANSPORT ARE RISING

Birgitte Keulen, Coordinator Cleaner Transport Facility at the European Investment Bank, which aims to accelerate investment into cleaner energy, made the point that CO2 emissions from transport are currently increasing; the move by consumers to SUVs and away from diesel isn’t helping. Offering solutions to this problem is a business opportunity. Birgitte said that there is a lot to do – and the European Investment Bank is “only doing billions – they need trillions”.

Beatrice Bigois, MD, Customers, EDF Energy, believed that subsidies for EVs should remain – especially if the UK is to stand a chance of hitting the new ‘net zero’ target in 2050. A good job is being done to reduce CO2 emissions from energy generation in the UK, with the recent achievement of a landmark two-week period with no coal generation.

EDF is involved in a range of activities in the EV sector, including packaging up solutions for car buyers to include vehicle leasing options (with DriveElectric), the supply of charge points, and renewable-backed electricity tariffs. EDF Energy has also entered into a partnership with NEoT Capital to accelerate the delivery of key infrastructure for EVs in the UK.

Other smart energy solutions such as Vehicle to Grid charging will be coming in due course, which have the potential to save money for EV drivers.

CHALLENGES IN THE AREA OF ELECTRIC DELIVERY VEHICLES

Peter Harris, Director of Sustainability, UPS, explained how electrifying the company’s vehicles – which can typically have 100 stops per day – has challenges, such as lack of product from the major OEMs; what is available is expensive; and vehicles have range restrictions. This led UPS to convert its own 7-8 year old diesel vehicles to electric powertrains. And then there’s the issue of expensive grid upgrades to ensure that a fleet of large electric vehicles can be charged…

MAKING A FLEET OF 48,000 VEHICLES CLEANER

The challenges for UPS seemed relatively small compared to those for Paul Gatti, Director, Royal Mail Fleet, who has 48,000 vehicles, spread over the areas of every Clean Air Zone, as well as over every electricity distribution network operator in the country. One of the main priorities so far has been to ensure compliance with the recently introduced London Ultra-Low Emission Zone (ULEZ) on 8 April 2019. Installing charging infrastructure is a big issue; apart from the cost of electricity supply upgrades, seeking consent from landlords has proven to be one of the biggest headaches. But another problem is the lack of consistency between different proposed Clean Air Zones around the UK. And then there’s the issue of the 7,000 vehicles that are rented in over Christmas. But the biggest challenge is likely to be the proposed dates that Clean Air Zones are due to start in relation to the (lack of) availability of cost-effective vehicles from manufacturers.

PLEASE CAN WE HAVE CERTAINTY ABOUT FUTURE VEHICLE TAX RATES!

Mike Potter, CEO, DriveElectric, made a plea to government – can we have certainty about future vehicle tax rates. We currently have a Benefit in Kind company car tax rate of 16% for EVs, which then drops to 2% in April 2020, but then nothing has been confirmed beyond that. Company car tax rates are a proven lever for behaviour change – this worked really well last time, with the result of getting drivers into diesel cars! Companies can register new cars at a rate that the public can’t do – and the companies can absorb the depreciation, allowing EVs to get into the second hand market.

Ian Johnston, CEO, Engenie, started his presentation by saying that we must grab the opportunity to make this change to e-mobility now. The cost parity between EVs and petrol cars is now coming faster than expected – possibly by 2022 – but one main final hurdle remains: the fear of the hassle that is public charging. Players in the industry have a responsibility to make it as easy as possible to find and use public charging stations. There are 2,000 rapid chargers in the UK now – and some are at awful locations. Sites need food, drink and toilets. And charge points need interoperability: there can’t be a situation where a customer arrives at a charge point and has to register – it must be possible to use a contactless bank card.

Peter van Praet, Chief Commercial Officer, EVBox, was yet another speaker who continued on the interoperability theme, and talked about all charging networks in Europe being interconnected: one card can access 60,000 chargers. In comparison there is a semi-monopoly in the UK. In the future EVs won’t be a problem for the electricity grid, they’ll be a solution: by using V2G and aggregating all batteries we’ll gain a huge virtual power plant, helping to balance the grid, and allowing more renewable energy to be used.

Helen Lees from PSA explained about how the Group, now incorporating Peugeot, Citroen, DS, Opel and Vauxhall, is bringing electric cars to market, including options that are more affordable than some competitors, and how the brand is also developing mobility services, including its ‘FREE2MOVE’ offer. Cars such as the forthcoming Peugeot e-208 will have powertrain options of petrol, diesel and electric, with all versions being built on the same production line. Every vehicle will have plug-in options by 2025. PSA is also doing its own battery assembly in-house. On the subject of public charging infrastructure, Helen suggested that government might have to step in and regulate in order to make public charging more user-friendly, to allow the mass adoption of EVs.

The Chinese company NIO had an EV on display at the Oxford EV Summit. The ES8 is a seven-seat pure electric crossover with an NEDC range of 220 miles. It’s priced significantly below the Tesla Model X, and it’s full of the latest technology including the world’s first in-car Artificial Intelligence system, as well as battery swap capability.

NIO was only founded as a global electric vehicle company in November 2014, but it already has a base in the UK, with its Formula E team in Oxford. In 2016, NIO unveiled one of the fastest electric cars in the world, the 1,360 PS, 1480 Nm, 194mph EP9, which set the lap record for an electric vehicle at the Nürburgring Nordschleife. The NIO EP9 also set the fastest electric production car time for the Goodwood Festival of Speed hill climb in 2008.

NIO began deliveries of the ES8 electric SUV in June 2018 and launched the ES6 electric SUV, with a range of 316 miles, in December 2018. The company also offers a range of smart energy solutions.

The NIO ES8 looks like a very desirable car – although it’s not due to be available in the UK for another year or so at least. New additions to the range of EV makes and models for consumers is a good thing. However the presence of NIO did serve to reinforce the messages from many of the speakers at the event that, despite claims from the UK government that the UK is a leader in EVs, NIO actually shows that countries such as China are gaining a lead, and significant action is needed in the UK if we’re not to be left further behind.

The 2019 Oxford EV Summit brought together many experts to look at different ways to accelerate the move to zero emission vehicles. There were many learning points, some of which are captured above, but perhaps the main message was that significant action is needed NOW.

Another recurring theme throughout the event was that motorists need EV charging infrastructure as well as EVs, and that EV charge points need to be easy to access. Anja Van Niersen, CEO, Allego made the point that in Europe, cars don’t stop at borders, so the same interoperable charging standards need to be in place throughout all countries. Yet the UK has a ridiculous system where, as mentioned by Catherine Hutt, Mobility Innovation Lead, Addison Lee Group, EV drivers need at least six different apps to access charge points on different networks. Imagine what would happen if this idea was introduced for all petrol and diesel car drivers, ie. they needed to register with different apps before they could refuel at different brands of fuel stations. Most motorists haven’t made the switch to electric vehicles yet, and they certainly will not do so if there is any inconvenience involved with charging an EV.

Based on the current situation of non-user friendly public charging infrastructure in the UK and little government focus on capitalising on economic opportunities from the shift to zero emission vehicles, there is a LOT to do if we’re to achieve our new 2050 net zero target. Vision and collaboration is needed, along with the majority of government action being on moving the UK forward in the area of sustainable development rather than being focused on other distractions.