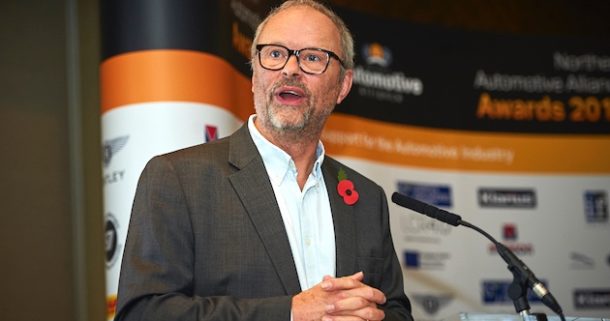 NAA Awards: Get ready… for an entertaining evening at the 2019 NAA Awards Dinner – book your table now!

The NAA Awards Dinner is the Northern Automotive networking opportunity of the year, so make sure you’ve booked a seat! The event takes place on Thursday 7November at the Mere near Knutsford in Cheshire, and due to overwhelming positive feedback, our Master of Ceremonies and guest speaker this year is once again Robert Llewellyn, so it’s guaranteed to be an entertaining evening…

Robert may be best known as an actor, playing Kryten in Red Dwarf, as well presenting Scrapheap Challenge. Although another series of Red Dwarf is due to be filmed soon, Robert is increasingly now known for his YouTube series ‘Fully Charged’, which covers electric vehicles and clean energy. This year also saw the second highly successful ‘Fully Charged Live’ event, which attracted over 10,000 people to Silverstone in June.

Book your table by contacting: zoe.desoer@northernautoalliance.com